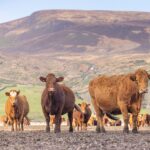 Luing cattle have been the backbone of the McCall family’s farming business since the 1960s, running hardy, low maintenance suckler cows which go on to produce progeny suitable for both the store and breeding rings.   The ability to be outwintered in the north of Scotland all year round has been one of the key attractions to the breed for father and son team Angus and Ewan, who farm at Culmaily, near Golspie - home to 600 acres of which 400 acres is ploughable, and the remainder permanent pasture.  A further 170 acres of rented is summer grazing for cattle.  Roughly 200 acres of spring barley is grown for malting, with the surplus used for feeding, which allows the livestock enterprise to be self-sufficient in relation to straw and muck.  READ MORE

The Graham family moved to Craigdarroch in 2000.  At the time Craigdarroch ran 1650 Blackface ewes and although it had previously run Luing cows, they had been sold off before we moved down.  It was a few years later that we realised the hill would benefit from having cattle grazing it and after considering a few other breeds and listening to the advice of my dad's cousin Willie Graham of Ravensneuk, Luings seemed the obvious choice.  Craigdarroch is a hill farm with a good, fairly dry hill but it has limited in-bye ground so we needed a breed that would thrive out on the hill all year round.  We slowly built up our numbers to about 55-60 cows which we felt was the ideal number for grazing the hill but not too many for making too much of a mess over the winter months.  At the time, I had no real interest in cattle and it was just a cow to graze the hill.  I never imagined that we would get as involved in the breed by firstly selling heifers at Stirling to a few year later selling heifers and then bulls at Castle Douglas.  READ MORE

Toplines and Tales - A history of the Luing breed

Luing cattle and the Cadzow brothers

Clashnoir lies on the snow line in the heart of Glenlivet, only 13 miles from the Lecht Ski Centre, and is home to one of the most upland and inland herds of Luings, alongside 1000 ewes.  Alastair Nairn, together with his wife Jean and son Stuart farm a beef and sheep enterprise across 2000 acres of Crown Estate tenanted land, situated within the Cairngorm National Park, most of which is more than 1000 ft. above sea level.  The business has moved from traditional continental crossbred cows toward a pedigree herd of Luing females, after having purchased 10 Luing cows from Lord Lovat’s dispersal a number of years ago.  Their Charolais and Simmental sired calves had impressive hardiness and performance, which was the beginning of the journey with Luings.  Following these initial cows, 8 pedigree cows with calves at foot were purchased in 2012, which were followed by a number of bulling heifers.  The pedigree herd now numbers about 130 breeding females with 40 heifers retained for bulling annually.  Read More...

Build it and they will come

"Build it and they will come." That's what Kevin Costner said in the film Field of Dreams.  In Kevin's case he was talking about a baseball pitch, but Richard Lockett thought the principle might still apply to other things, including lapwings.  Richard's efforts were inspired by his mum's diary which recorded a sighting of lapwing chicks in 1987.  Richard set about to change and manage the habitat to attract breeding pairs of lapwings back to the farm, and found that cattle are an essential part of habitat management for waders.  The habitat in question required hardy animals with good temperaments, natural foraging ability that produced a commercially viable calf.  Luings ticked all the boxes, and the waders returned too!  Read the whole article Build it and they will come_Richard Lockett

Out and About with Guy Everard - Leigh

Guy Everard is part of a family farming business that farms four units which all form part of the Miltons Estate.  One of these units is Winsford Hill, a 1,250 acre block of moorland which has been in various Natural England environmental management schemes since 1995.  Winsford Hill rises to 1300ft above sea level and has an average annual rainfall of 70 inches.  Part of a modified management plan for the moorland allowed the introduction of native cattle to winter on the moor, and in order to be able to graze cattle there all year round, the Luing was a natural choice.  The Luing is hardy enough to stick it, but is also capable of producing a heifer that is the right type to go into the commercial suckler herd.  Read the whole Out and About with Guy Everard .

Out and About with Rory Bell - Plenderleith

It's 14 years since the business of Robin H. Bell ventured onto its Luing journey, and Rory Bell reflects on this journey in an interesting article that outlines the background and reasoning for the choice of Luings for Plenderleith.  The most important traits have been temperament, maternal traits, fertility, foraging ability, health and versatility.  The Luing females are through the yards only twice a year; at weaning and for a fluke treatment.  The outside fed barrier has been replaced with self locking yokes, which will reduce the need for the cows through the yard even further.  The Luings have proven that with appropriate supplementation they can utilize the poor quality roughage and improve it, which benefits the sheep too.  To read the whole article Out and About with Rory Bell. 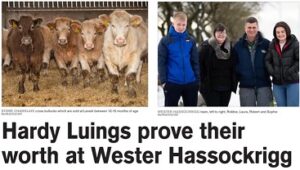 Katrina has featured the Nunnerie Herd of Luings, breeder of Nunnerie Xenon, 25,000gns at Castle Douglas in February 2020. Breeder Feature_2021_Nunnerie

Iain has revisited an article first published in a beef magazine in Alberta, Canada which captures some of the work of Dr Jan Bosma, a South African researcher who led the Mara and Mesina Research stations in the Northern Transvaal from 1937-1960. Bosma Revisited_2021

Click here to read the report by Lynsey Clark of The Scottish Farmer featuring the Milkieston herd in advance of the 45th Premier Sale.

Face to Face with Charlie Bell

The Price of Pride

By Elaine Murray and johnny Mackey
Around 300 visitors basked in some glorious sunshine on the Solway coast on 14th August 2010 during Steven & Elaine Murray's open day at West Preston. Read More...

Luing members are regularly featured in our 'Out and About' section in our annual journal, where they write a short article, explaining the background to the farm and their involvement in the breed.

Wise, weird, wonderful or woeful - we've all been there!  If you've an interesting or indeed useful Luing story why not share it with other members?  We are genuinely interested in them all  - with photos if you have them.  E-mail your stories to secretary@luingcattlesociety.co.uk.

Iwan and Eleanor Davies from Hafod-Y-Maidd a Farming Connect Demonstration Farm held an Open Day in February to show North Wales what the Luing can do.
www.menterabusnes.co.uk/farmingconnect/news/hafod-y-maidd-open-day

...with Rory Bell from Plenderleith and Roxburgh Mill in the Scottish Borders. Out and About with Rory Bell_2021

...with Shane Cadzow, a partner in Cadzow Brothers Ltd., a business that has undergone some significant changes over the past year.
Read More..

...with Gareth Lawton of Brookstone Farm, a small hill farm In North Wales with land ranging from 650ft - 1200 ft which is the home to Brookstone Luings.
Read More...

...with Bruce Gilchrist, farms manager for Floors Farming since 1996, who was converted to Luings as he looked over the fence and saw what his neighbour was doing with the breed! Bruce gives an insight into how he has developed the operation for Roxburghe Estates and where he hopes to be before too long.
Read More...

...with Scott Renwick who, along with various of his relations, has recently set up a nucleus of Luing herds in the Ullapool area of Wester Ross. Here he tells us how they are doing for him in a 52" rainfall per annum area.
Read More...

...with Malcolm Fawcett - a Luing Council Member who farms with his parents in the Dumfries-shire hills. The Fawcett family are renowned for presenting top drawer bulling heifers at the society's premier sale in February.
Read More...

...with Robin Wells who was born into a farming family and after leaving school he took up an apprenticeship in butchery. Cattle have always been a part of his life - from rearing his first calf on a bucket at 10 years old to buying prize winning cattle at primestock shows for his butchery business.
Read More...

...with the Calvert family of Tasmania, Australia. After 25 years of success with Luing cattle, the Calvert family feel sure they will not be changing breeds anytime soon. They imported Tasmania's first Luings in 1982 and since then they have established a stud herd of 35 and a commercial herd of 200.
Read More...

...with John Buglass, Estate Manager of the Glen Lyon Estate who established a Luing herd in 2004 which goes from strength to strength.
Read More... 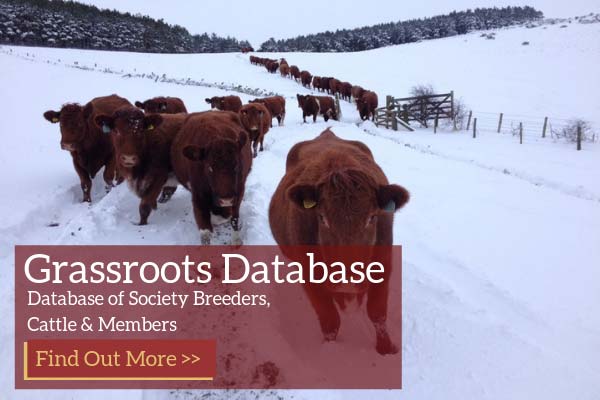 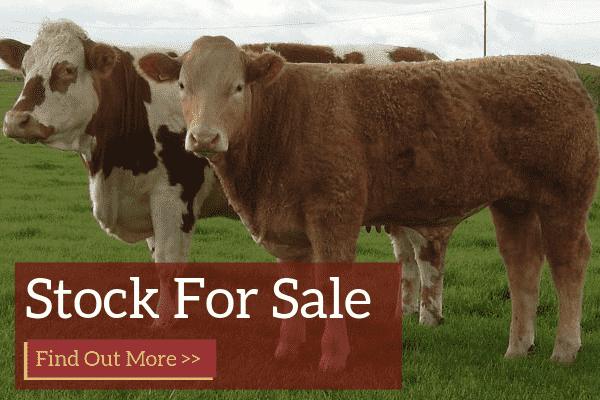 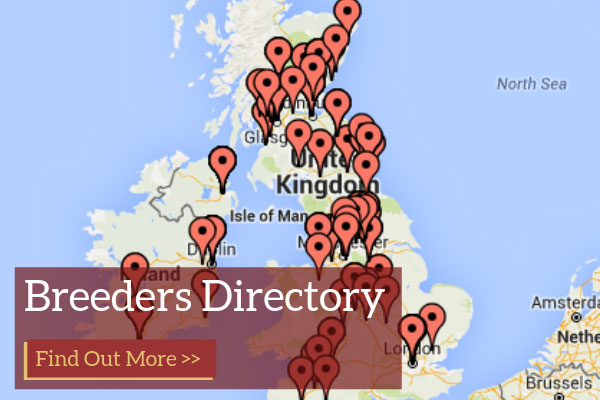 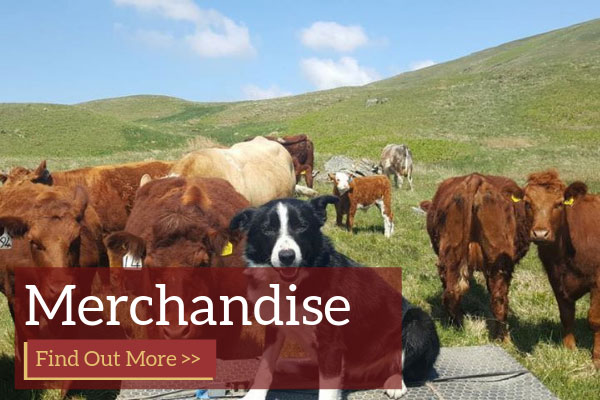