Why Luings? The Luing breed has much to offer as the hill and upland sector of British agriculture seeks to offset higher feed, labour and building costs. Developed as a cow breed for purely commercial purposes, the Luing continues to fill a critical gap in beef production.

The Luing is extremely hardy and an efficient and fertile mother. Its ability to rear a suitable calf in adverse weather conditions is widely renowned. With good sound feet, and a strong bone structure its considerable merits guarantee a good investment and currently place it high on many farmers' wish lists.

History of The Luing Breed

The Luing breed was famously evolved by the Cadzow brothers on the Island of Luing in Argyll off the west coast of Scotland. Admiring the outstanding complementary qualities of two great beef breeds – the Beef Shorthorn with its fleshing qualities and the Highlander with its ruggedness and hardiness, in 1947 they selected some of the best first cross Shorthorn/Highland heifers that could be procured.

These heifers were bred to the Shorthorn bull, Cruggleton Alastair. Two sons of this breeding were kept and mated to their half-sisters: Luing Mist in 1952 and Luing Oxo in 1953. From then on, by following up this in-breeding with line-breeding, the Luing breed was firmly established and with many generations sired by Luing bulls, they proved themselves as breeding true to type. The British Government officially recognised the Luing as a breed in its own right in 1965.

The breed is now a 'breed of our time' and is currently thriving right across the UK, Ireland, Europe, Canada, New Zealand, Australia and South America.

Breed Guidelines at a Glance

“Sound, practical reproductively efficient cattle with good temperaments and longevity will never go out of style”.....Duello 1955

Selection of a service sire is a hugely important decision.  It is recommended that breeders use as much information as is available, including assessing the dam's maternal characteristics.  The Luing Cattle Society try to provide as much maternal data as possible on its herdbook and in sale catalogues.  All bulls forward for Society Sales have had their dam inspected and classified and their score data is available on Grassroots for use in your selection decision making. 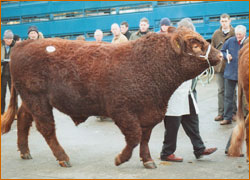 Stature
Bulls offered at annual February sale to be at least 18 months old on day of sale and not less than 52” high at shoulder and min 38cms scrotal circumference.